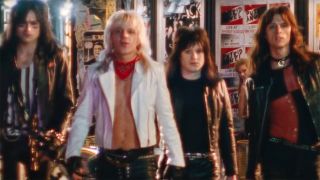 Motley Crue have released a short trailer for their long-awaited biopic The Dirt.

The film will premiere on Netflix on March 22 and is based on their 2002 book The Dirt: Confessions Of The World’s Most Notorious Rock Band.

A full trailer is expected to land later today.

Motley Crue brought the curtain down on their 34-year career with a show at the Staples Centre in Los Angeles on December 31, 2015. They even went as far as to sign a high profile contract meaning they would be sued if they ever hit the road again.

But they reconvened in the studio last year to record four new tracks for The Dirt, with one of them featuring a guest appearance from rapper Machine Gun Kelly.

Motley Crue: The Dirt
The Dirt: Confessions Of The World's Most Notorious Rock Band is a no-holds-barred look at the Crue’s wild history and gives a glimpse into their rollercoaster world. Essential rock reading.View Deal