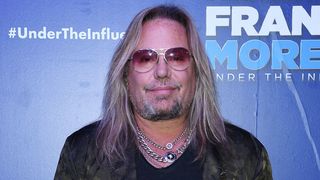 Former Motley Crue frontman Vince Neil has been charged with misdemeanour battery after a violent incident in April.

He’s accused of having assaulted a woman who was trying to collect autographs in the Aria Hotel, Las Vegas, where he was having lunch with actor Nicolas Cage and comedian Carrot Top.

Reports at the time suggested Neil had reacted violently after the fan approached their table and said: “Nicolas, I love you.” Cage and Neil were later seen in an animated disagreement, in which the actor told him: “Stop this shit now.”

Las Vegas Police Department Officer Michael Roriguez tells Rolling Stone: “Mr Neil and Mr Cage went to Aria. A female was attempting to talk to or get an autograph from Mr Cage.

“Mr Neil subsequently pulled her down to the ground by the hair.”

The police decided to press charges after reviewing CCTV recordings. Neil originally denied the allegation, with his lawyer David Chesnoff saying: “People shouldn’t pre-judge things until all the facts are in.”

The singer served 10 days of a 15-day jail sentence in 2011 after being convicted of drunk driving in Las Vegas the previous year. He faced being sent back to prison after being charged with an alleged assault on his ex-girlfriend, but escaped because no “stay out of trouble” order had been applied to the sentence.