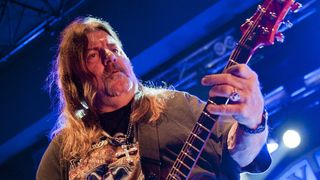 Molly Hatchet guitarist and founding member Dave Hlubek has died that the age of 66.

The news was announced via the group’s Facebook page, which was accompanied by a statement from the band.

It reads: “It is with great sorrow to announce the passing of our beloved friend and band member Dave Hlubek. Dave was one of the founding lead guitarists of Molly Hatchet. Amongst his many contributions to southern rock is Flirtin’ With Disaster.

“Our condolences and our prayers go out to his family during this time of loss. He will be missed but never forgotten, as the music lives on through his legacy in Molly Hatchet.”

There has been no official word on the cause of death, but reports indicate that he suffered a heart attack.

Recalling the early days of Molly Hatchet, Hlubek told Jacksonville’s Florida Times-Union in 2003: “Nothing came easy. We worked our behinds off. Molly Hatchet, Lynyrd Skynyrd, .38 Special, Grinderswitch, all of us.

“Most of the bars we played, you had to fight your way in and out of. It was so competitive, but it made us strong.”

Molly Hatchet have several live dates planned throughout the US and Europe which are scheduled to get under way later this month. At the time of writing, there has been no word if those shows will go ahead.

In April this year, original Molly Hatchet bassist Banner Thomas died at the age of 63, while drummer Bruce Crump died in March 2015.