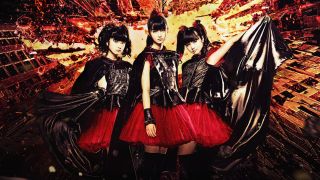 The singer – aka Moa Kikuchi – explains that karate is the only martial art that doesn’t use the technique of ‘ukemi’, which loosely translates to ‘falling safely,’ and she says that fearless attitude sums up Babymetal’s drive.

Moametal tells Music Choice: “We would be thrilled if people across the world would embrace Japanese culture through this song.

“Karate is the only Japanese martial art which doesn’t have ukemi. And we, Babymetal, are always looking ahead and forward without ukemi. I believe this song captures the essence of Babymetal.”

Meanwhile, Babymetal have been incorporated into Nintendo Wii U game Super Mario Maker. From today (April 28), the trio’s image can be downloaded as a Mystery Mushroom costume. In the game, when Mario grabs the mushroom, he changes into Babymetal and their voices can be heard during gameplay.

A video of the game footage can be viewed below.