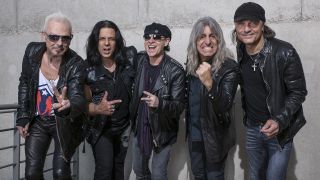 Mikkey Dee has spoken about the challenge of readjusting to playing with Scorpions after almost 25 years as a member of Motorhead.

Dee was named a permanent member of the veteran German outfit in September last year, after having joined them on a temporary basis. He was brought in to replace James Kottak, who had a turbulent history with the band.

But while he admits it wasn’t easy after so long with his old band, Dee says he and Scorpions had an instant connection – and he’s delighted with the results.

Dee tells the Talking Metal podcast (via Blabbermouth): “We clicked right away and it sounded really good. I was filling in for James – he didn’t feel good at that point and he just needed some time off.

“Then the guys decided to keep me and I had nothing going at that point. So we just clicked and it sounded right. Personally, we just liked it all. It was great. So here I am.

“They have their routines, they have their way of working and so do I. So either it clicks or it doesn’t on the personal level and on the musical level – but we clicked right away and they loved what they heard and how I played, and so did I. It was great for me to join a band and play something else as well.”

He continues: “After almost 25 years with Motorhead, playing the same music, playing the same stuff and thinking that way as a drummer, it was a big, big challenge for me and it was not easy – and it still isn’t easy.

“These guys are great musicians and they know what they want, they know how to sound, and I have to adjust myself at the same time as they need to adjust to me.

“But I think we manage pretty good and the result is a great live show. It’s very tight, it’s very heavy. I’m giving it my best up there, so it’s good.”

Scorpions will head out across North America on their Crazy World Tour with Megadeth next month. They’ll then play further shows across Russia and Europe later this year.

Find a full list of their tour dates below.

Big City Nights, Loving You Sunday Morning: The Turbulent Story Of The Scorpions