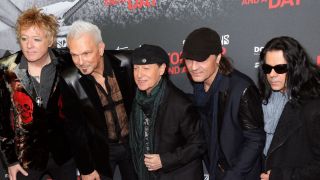 Scorpions frontman Klaus Meine says drummer James Kottak has been welcomed back as a member of the family after the “disaster” that sent him to rehab,

Kottak was arrested in the United Arab Emirates last April after drunk behaviour in Dubai Airport. He was jailed for one month and fined £300, then checked into an addiction treatment facility. He return to the band in November.

Meine tells TV Rock Live: “It was like a disaster. He did make a mistake – he crossed the red line, definitely. This was not rock’n’roll and it was not funny.

“We said to James that he was pretty much out of the band. We told him, ‘You have to go to rehab. You’ve got to take care of yourself and take it seriously.

”‘We’ve set the doors wide open but it’s really up to you.’”

The frontman is delighted that Kottak made the most of the chance offered to him. “He recorded the album in Stockholm at the end of last year, and we played two shows with him. It was fantastic – it’s great he’s back in the family.”

The Scorpions were this month given a national award in their native Germany. They accepted the Lower Saxony State Prize from Hanover premier Stephan Weil.

Meine says: “It’s been fantastic that, after so many years, our own country honoured.. We’ve gotten so many awards over the years – but when you’re honoured in a big way in your own city, that’s always something special.”

He’s proud of the band’s track record as “ambassadors of music,” saying: “There are very few artists who came out of Germany and had a world career. We are Germans with a German mentality. We believed in ourselves and believed we could stand as competition with the best bands in rock, from AC/DC to Van Halen and Aerosmith – which we did.

“We know it can be all over tomorrow. Part of the generation who started in the early ‘70s, at some point, their era will come to an end and we are so lucky till now that we can still pull it off, that we still have this global audience and this global stage. It feels like a privilege. You cannot take it for granted.”