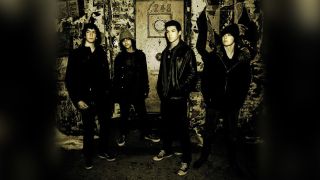 Next To None, the teenage prog metal prodigies featuring Mike Portnoy’s son Max, have revealed their first track.

They’ve launched a video to accompany_ You Are Not Me, shot during recording sessions with Portnoy Senior, who’s producing debut album A Light In The Dark_.

In the clip the former Dream Theater sticksman says: “I can’t stress enough how much of this album is them. I don’t want people to get the impression I’m writing anything.

“I’m blown away that a group of 15 and 16-year-olds can make music this mature, intense and diverse at the age they are. They’re doing things I wasn’t doing until I was in my 30s.”

Max, 15, is joined by frontman Thomas Cuce, 16, guitarist Ryland Holland, 16, and bassist Kris Rank, 15. A Light In The Dark will be released via InsideOut on June 29, while the band support Haken on a US tour next month.

Cuce says: “Expect some great musicianship and intricate cool parts. I’m excited for people to hear the track. It’s kind of slow, so… for the ladies.”