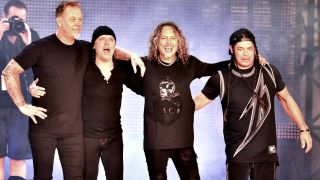 Metallica have released a video showcasing a rough garage demo of their track Fight Fire With Fire.

The song originally appeared on the band’s 1984 album Ride The Lightning, which will be reissued along with their debut Kill ‘Em All on April 15 (Friday).

The band say: “Much of the content featured in the deluxe editions of Kill ‘Em All and Ride The Lightning was unearthed in Lars’ Vault.

“Stacks of cassettes were brought in to HQ in order to be transferred – here’s a clip of a rough garage demo of Fight Fire With Fire going through that process.”

The album packs will include pictures from the band’s personal archives, along with detailed articles written by people who witnessed the albums being made.

Both are available for pre-order.

Metallica are global ambassadors for this year’s Record Store Day, which take place on April 16 and will launch Liberte, Egalite, Fraternite, Metallica! to mark the occasion. It was recorded at the Bataclan, Paris, in 2003, 12 years before 89 people were killed as the Eagles Of Death Metal performed there. All proceeds from the release will be donated to the Give For France fund.

Meanwhile, the CrimeStoppers charity in Charlottesville, Virginia, is to award money to those who helped in the Morgan Harrington murder case.

The Metallica fan disappeared after attending the band’s concert at the John Paul Jones Arena in the city on October 17, 2009.

Metallica contributed $50,000 to the reward to find her killer, with the Harrington family adding an additional $100,000. NBC 29 report that Jesse Matthew pleaded guilty to her murder and abduction last month, and the charity will now pay out the money to two people who brought evidence against Matthew.