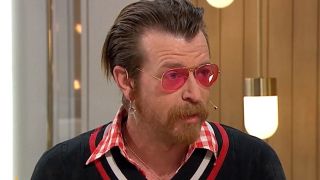 Eagles Of Death Metal frontman Jesse Hughes has told of the moment he thought he’d be shot dead by a terrorist in Paris.

And he’s reflected on the bravery of the people he saw as they died when gunmen invaded Le Bataclan on November 13 last year.

They killed 89 people in the venue, while a further 41 lost their lives in related attacks across the city.

Hughes tells Sweden’s TV4 that the massacre began after “the very last note of the song, almost like a diabolical syncronicity.”

He says: “I knew exactly what was going on. I think I might have been the only one in the whole theatre who knew instantly.

“I saw a couple of girls go down and then we were able to get off the stage. I didn’t see my girl, Tuesday, and I went to the backstage area. When I opened up a hallway there was a dude at the end of it, holding a gun.

“He didn’t see me. The door shut behind me and I was trying to back up, like very very sneaky. But he noticed me. I thought I was dead – I waited for the shots to hit me.”

But as the terrorist pulled his rifle from his back, the barrel struck the doorframe above his head, giving Hughes time to escape. “I opened the door and he started firing and his rounds shot the door behind me,” he remembers.

He’d previously told how audience members had done their best to protect their friends. Now he says: “I didn’t see a single coward. I just saw people doing some of the most beautiful things a person can do.

“For lack of a better way to describe it, my friends died beautifully. They died very well, with great courage.”

He admits he’s still suffering from recurring nightmares, and hopes to “get as far from that feeling as I possibly can get.”

He adds: “You have to keep your heart light. if you have happiness you have to get it out. I’m not going to let the bad guys win, I promise you.”

EODM cancelled a European tour after the massacre. They performed the first rescheduled show in Stockholm last night (February 14) and they’ll return to Paris tomorrow, following a guest appearance with U2 in December.