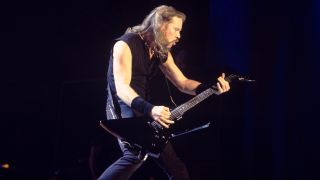 Metallica have gone back to the summer of 1994 in the latest episode of their Metallica Mondays series.

It’s the 17th set pulled from the band’s vaults to keep fans entertained during the lockdown, with Metallica this week picking their show from the Shoreline  Amphitheatre, Mountain View, California, from July 22 that year.

The concert was part of Metallica’s Shit Hits The Sheds tour, with support on the night coming from Suicidal Tendencies – featuring Robert Trujillo on bass – and Candlebox.

Before the stream got under way, Metallica drummer Lars Ulrich gave a brief update on when their S&M2 live album will see the light of day – after he revealed it last month on Jimmy Kimmel Live.

Ulrich said: “I occasionally read the comments and I know a few of you were asking for an S&M update, so here’s an S&M update: Guess what? Real fucking soon! How’s that for an update?”

Ulrich previously reported that the box set would be released some time in the autumn.

The performances were captured during Metallica's two shows with the San Francisco Symphony Orchestra at the city’s Chase Centre in September 2019 – two nights which celebrated the 20th anniversary of the original S&M album.