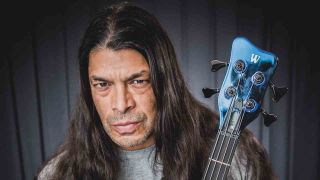 When Rob Trujillo joined Metallica in February 2003, he stepped into one of the most envied jobs in metal – as well as one of the toughest. The band had barely emerged from arguably the most turbulent and testing times of their career – a period that had seen the band teeter on the edge of oblivion while James Hetfield dealt with his demons. And then there was the fact that anyone who plays bass in the world’s biggest metal band is destined to forever be in the shadow of the late, great Cliff Burton – just ask Trujillo’s predecessor, Jason Newsted.

But then the LA-born four-stringer is made of hardy stuff. Before sighing up for Metallica, he had worked with some of the scene’s biggest characters, from Ozzy Osbourne and Jerry Cantrell to Black Label Society’s Zakk Wylde and Suicidal Tendencies’ psycho-in-chief, Mike Muir. We caught up with Rob to look back on a journey that has taken him from jazz school to the planet’s biggest stages.

Did you witness very much violence?

“Yeah, we’d see a lot of that in the streets. I got beat up a couple of times where they gang up on you but I was younger. As I got older I didn’t really experience that. Maybe I knew the right people.”

What was the defining characteristic of your childhood?

“It was all about the music at home. My mother was a huge fan of Motown – people like Marvin Gaye, James Brown, and Sly And The Family Stone. She was really young so her and her girlfriends would be dancing, and there was this chest of drawers I would climb up on and play air guitar or air saxophone – air-anything. Then I’d go hang out with my dad who lived in Venice, and he’d play anything from the Rolling Stones to Led Zeppelin to Beethoven. But then my cousins were listening to Black Sabbath or on the R&B side they were listening to Parliament.”

When did you first start playing music?

“We lived on the border of Culver City, Mar Vista, which was probably about three miles outside. There was a heavy skateboard movement there, and I ended up playing a lot of backyard party bands. I played a lot of Sabbath, a lot of Ozzy, Rush but challenging Rush, Zeppelin, it goes on. I went to jazz school when I was 19. I really wanted to be a studio musician but I was still passionate about rock and metal.”

How did you go from playing jazz to crossover thrash in Suicidal Tendencies?

“I didn’t know [singer] Mike Muir very well but I was acquainted with him, but  I went to school with Rocky [George, guitarist] and he was my link into the band. Mikey and I became really great friends and for almost eight years we were talking about music or recording some kind of project…”

“Oh yeah. I opened up his creative mindset to a lot of stuff that I was into, and he was a real fan of bass whether it was Geezer Butler or something a little more on the R&B side of things. It was all about no rules and fusing styles of music from different worlds together, punk and ska, metal, funk, whatever…”

You’re credited as ‘Stymee’ on your first record with Suicidal Tendencies, 1999’s Controlled by Hatred/Feel Like Shit...Déjà Vu. Why?

“Wow… there’s a lot of reasons for Stymee. I didn’t actually choose the name, it was inherited, so you’d have to ask Mike Muir about that!”

How did you get to play for Ozzy Osbourne?

“It was because of Infectious Grooves. I remember we were recording The Plague That Makes Your Booty Move with Mark Dodson at a studio called Devonshire, and Ozzy was in there at the same time doing No More Tears, so we were basically roommates, or studiomates for a while.”

That sounds as though it could have been pretty dangerous.

“Yes! Ozzy would be running down the hallway, completely out of his mind doing a lot of stuff back then, I can’t tell you what but pretty much anything. We started thinking it’d be cool if he sang on a song, and we were on the same record label [Epic] so he came into the studio one night and surprised us all and went ‘Uh, hullo’ and we were in the middle of a mix but we were like, ‘Come on, let’s get him on now!’ [the song would later become Therapy). Then suddenly he would never leave – he’d come in and go, ‘Let me hear the song, that’s what I want to play!’ and we’d dance and we’d do all this crazy stuff and he’d go, ‘Have you got any beer?’ No. ‘You got any wine?’ No. ‘You got any pills?’ No. ‘You got any cocaine?’ No, Ozzy! ‘You guys are boring!’ He still invited us to do the Theatre Of Madness tour with them in 1991 and from then we toured about a month, got to know each other a little better and eight years later I got the call, and that’s how I got to know Zakk who I’d later play with in Black Label Society.”

Working with ex-Alice In Chains guitarist Jerry Cantrell for his second solo album, 2002’s Degradation Trip must have been quite a stretch too…

“I was primarily just there to enhance the bass, but he taught me a lot about simplicity and using space and notes that really mean something to a song. And I wrote some songs with Ozzy that were really cool but you’d never know, one day he likes the song, and the next day he doesn’t and he doesn’t remember that he liked it, and then six months later he loves it and goes ‘Why didn’t you show me the song before?’ You’re constantly battling with which Ozzy you’re going to get when you’re putting your ideas together, but it was a wonderful experience.”

It must have been very different from joining Metallica in 2003, at the height of their problems.

“Yeah, it seemed like James was walking a tightrope, on thin ice – he seemed very guarded and he had a lot of things going on in his personal life. Everything was according to a schedule. Now it just seems like he’s got his juju back. He’s sober of course but he’s got that Hetfield attitude that’s confident and powerful and creative, but he’s also very inspired by ideas that I’ll have.”

You must have been very frustrated at not writing for St Anger.

“Yeah. I wasn’t thinking about new riffs, it was catalogue. Learning how to play Phantom Lord, I didn’t actually get my headspace into writing mode until the third or fourth year in the band when we started Death Magnetic. I wanted to see how the guys worked together and it was like going to Metallica school, the writing world of Metallica. Every day I was there with them and those guys would just go at it and I was like mediator. The things I did come up with are in the album. I wanted to see how the creative machine behind Metallica works, and it is a relief to get through that phase of the journey with them.”

How did they respond to your input?

“With these guys when they’re really gelling you’ve got to let them go with it and that’s where a lot of the magic comes from. Spontaneity is key in this band. James plugs in his guitar and flicks the tone knob and in five seconds he’s playing a riff so Lars is always like, ‘We’ve got to capture every moment we can.’”

Cliff Burton casts a long shadow over the band. That’s a lot to live up to.

“I have the utmost respect for Jason and Cliff, and what I love about Cliff is where he was coming from as a bass player in this genre of music, metal, he had a real voice and he was speaking with his instrument. Very melodic, this wonderful stage presence… he was just a very unique individual and very talented, obviously. Jason offered a more meat and potatoes kind of vibe to the band. Jason’s a leader in his own way and I think that’s captured live, but I think that can be a critical thing when it comes to his contribution to the music. I wasn’t there, I don’t know how it played out, but we’re all different, and none of us, me or Jason, are trying to be Cliff. I’m not trying to be Jason. We’re our own entities, I just try to give everything I’ve got.”

Are Metallica a different band from the one you joined in 2003?

“When Metallica get together and plug in they just turn into these big teenagers. It keeps the music exciting. That’s why I know the next phase is going to get even better; it feels like there’s something new happening right now with us. You always have to hit those walls and barriers, with age things happen and in the world of Metallica, around St Anger, that’s what happened. Now that I feel like I’m in the band I feel like there’s a lot of unity and we share a lot of the same kinds of interests. I can ask them about how to change a diaper and what happens in the terrible twos, you know, potty training…”