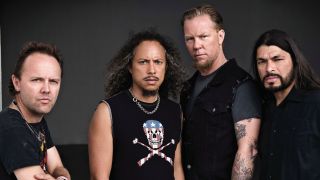 Kirk Hammett has described some material on Metallica’s 10th album as “a bit more progressive” than previous work.

He continues: “I would say some of the stuff is similar to Lords Of Summer, which is one of the more accessible-sounding riffs, and there’s a really cool melody. A lot of the other material is a little bit more progressive — kind of along the lines of Death Magnetic.”

He says the Justice comparison applies to their overall approach, but adds: “It doesn’t sound like …And Justice For All. It doesn’t have that sound, which I thought was very unique at the time.”

The guitarist insists he won’t limit himself when it comes to finding inspiration. “I’ll throw on the radio and start hitting the stations,” he says. “If I hear a piece of music that I think is particularly interesting, maybe catch something and think, ‘Wow, that’s a pretty good melody. Maybe I should apply that to this solo section.’

“It could be any type of music — rock, heavy metal, reggae – anything. And I’ll use that as maybe a starting point to maybe create something different.”

In January, Metallica posted a picture from their studio. The thrash giants headline this year’s Reading And Leeds festivals.