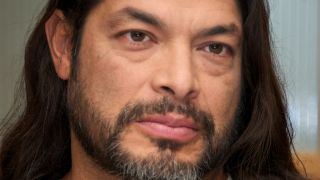 They’re due to headline this year’s Reading and Leeds festivals and he reveals when he sees Disposable Heroes from 1986’s Master Of Puppets on the setlist, he’s always happy as it’s his favourite song to play on stage.

He tells Talk Is Jericho: “What I’m proud of with being in Metallica all these years is being able to play the Black album in its entirety – songs that were never played live like The Stuggle Within. Even songs like Orion – we play that a lot now. That was a song that hadn’t really been played, along with Dyers Eve from …And Justice For All.

“The fact that here we are aged 50 and we’re attacking songs that hadn’t really been attacked, I feel that challenges us and it makes this unit a better band. We keep things exciting.”

He adds: “When I see Disposable Heroes on the list, it’s always fun. The reason is because I love the groove. It’s got a real funky feel and then it goes fast.”

The band are continuing to work on the follow-up to 2008’s Death Magnetic, although Trujillo recently admitted they’ve been “lax” over songwriting. He’s also making a documentary on jazz bassist Jaco Pastorius and launched a Pledge campaign to ensure work is completed on the project.