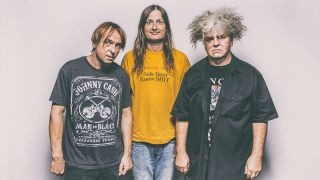 Melvins are premiering their new song What’s Wrong With You exclusively with Metal Hammer.

Taken from the band’s upcoming release A Walk With Love And Death, it features Steve McDonald on lead vocals with That Dog’s Anna Waronker on backing vocals.

“There’s no other song on this record that sounds like it,” Melvins mainman Buzz Osborne tells Metal Hammer, “and that’s what makes it so cool!”

“This was a huge undertaking,” explains Buzz. “All three things: the album, the soundtrack and the film are benchmarks for us.”

Drummer Dave Crover describes the album as “one giant, dark, moody, psychotic head trip” and “not for the faint of heart.

“You’ll sleep with the lights on after listening.”

A Walk With Love And Death is out July 7, via Ipecac Recordings.

Buzz Osborne's guide to the greatest Melvins albums ever made