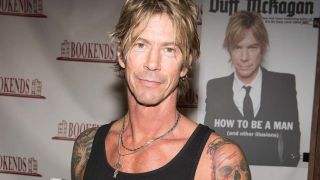 Former Guns N’ Roses colleagues Duff McKagan and Izzy Stradlin are back in the studio recording a new album.

The pair have collaborated on several projects since they split from Axl Rose in the 90s, including McKagan’s How To Be A Man EP, which ties in with the bassist’s book of the same name.

McKagan, who’s released a clip from his Seattle sessions, said last month he’d be happy working with guitarist Stradlin for the rest of his career.

McKagan recently recalled his darkest days when he thought his drug addiction would kill him. In May, the bassist shot down a biographer’s claim that he could reunite Guns N’ Roses.