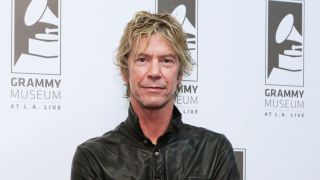 Duff McKagan trusts fromer Guns N’ Roses colleague Izzy Stradlin so completely that he wants to keep working with him for ever.

The pair have collaborated on a number of studio projects since leaving GnR decades ago, most recently when the guitarist worked on the bassist’s How To Be A Man EP, which ties in with his latest book.

McKagan tells Consequence Of Sound: “I’ve played on a bunch of Izzy’s records over the last 15 years and it was really nice to be in the studio with him for a couple of days.

Discussing the chance of working together in the future, he says: “I’d like to do more music with him. For the rest of my life.”

McKagan last month shot down the latest round of GnR reunion rumours, after a band biographer claimed he could persuade Axl Rose and Slash to talk out their differences. The bassist said: “That came out of left field for me. Little weird.”