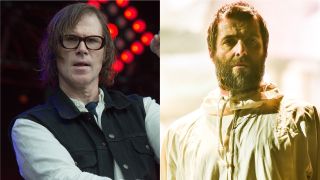 Mark Lanegan says the reason why Oasis abandoned their 1996 US tour was because Liam Gallagher backed down from a fight.

Lanegan and his band Screaming Trees were supporting Oasis on the (What’s the Story) Morning Glory tour – but the run of shows was cut short, with the claims coming from Lanegan in his new book Sing Backwards And Weep.

While he praises Noel Gallagher for being “the true genius behind Oasis” and treating Screaming Trees and their crew with common courtesy on the tour, Lanegan’s ire is directed straight at Liam.

Liam is said to have mocked Lanegan’s band, calling them “Howling Branches” which led Lanegan to retort: “Fuck off, you stupid idiot.”

That then led to a war of words between the pair, which culminated in Lanegan reportedly challenging Liam to a fight when they hooked up again in Miami.

However, the show never went ahead as the tour was called off, with Langean writing: “I detested bullies and refused to put up with them. Liam Gallagher was an obvious poser, a playground bully. Like all bullies, he was also a total pussy.

“He had quit and bailed before I could have a go at him before his promised playground battle royale in Miami. ‘Typical,’ I thought.

“That phoney motherfucker had pissed his pants and gone home to mama before I had a chance to blow this whole thing up myself.”

Now, after the book was  published last week, Liam has reacted to Lanegan’s take on events from 24 years ago.

He tweeted: “Mark Lanegan, here’s how I saw it: I asked you your band’s name, I was fucking around and called it something else.

“You being an uptight junkie and not having a sense of humour, got your little grungy knickers in a twist. Another bullshitter trying to sell a book.”

Screaming Trees split in 2000, with Lanegan going on to forge a successful solo career. His new album, Straight Songs Of Sorrow, will be released this coming Friday (May 8).

Oasis, meanwhile, called in a day in 2009, but last week, Noel Gallagher shared a previously unreleased Oasis demo called Don’t Stop… which he recently discovered in an old box of CDs at his home.

Mark lannegn here’s how I saw it I asked you your bands name I was fucking around and called it something else you being an upiight junkie and not having a sense of humour got your little grungy knickers in a twist another bullshitter trying to sell a book LG xMay 4, 2020