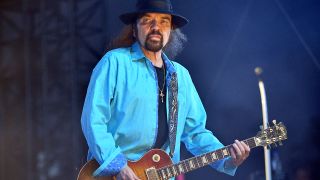 Lynyrd Skynyrd have been forced to postpone two shows which were due to take place this coming weekend as guitarist and original member Gary Rossington recovers from heart surgery.

The band will be heading out on the road with Jamey Johnson, The Marshall Tucker Band and Bad Company on the Last Of The Street Survivors Farewell Tour.

Friday’s show (August 16) at T-Mobile Arena in Las Vegas has been moved to October 18, while their planned set at Wheatland’s Toyota Amphitheatre on August 17 has been rescheduled for October 19.

Tickets purchased for the original dates will be valid for the rescheduled shows.

Lynyrd Skynyrd vocalist Johnny Van Zant says: “We all appreciate the well wishes for Gary and apologise for any inconvenience this may have caused. But he can’t wait to come back and perform at 100% for the fans. We will see you all soon!”

Rossington had been experiencing fatigue and other symptoms related to a leaky heart valve and had surgery on July 31 to successfully repair the valve.

Lynyrd Skynyrd released the album Live In Atlantic City in September last year, which featured guest appearances from 3 Doors Down, Hank Williams Jr and Bo Bice. It was recorded in New Jersey in June 2006.