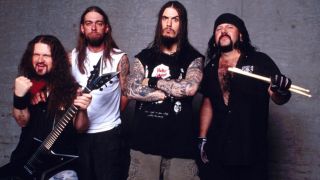 Early mixes of Pantera tracks Drag The Waters and Floods have been made available to stream.

The Great Southern Trendkill is a two-disc reissue collection which includes a remastered version of the 1996 record, alongside a disc of unreleased tracks, instrumental recordings and rough mixes.

The set also contains three live tracks War Nerve, Suicide Note Pt II and Sandblasted Skin, which were recorded at the Dynamo festival in Holland in 1998.

Late guitarist Dimebag Darrell previously said one of his favourite things about his solo on Floods is bassist Rex Brown “playing behind it.”

He told Guitar World: “That solo was thought out in a more orchestrated fashion than some of the others I play where I just start ripping right off the bat. The thing that really makes the Floods solo come across like it does is bassist Rex Brown’s playing behind it.

“He’s using his fingers and he plays a whole bunch of cool licks and shit in there. He definitely adds to the vibe and feel of my lead because I’m playing off his part a lot—it was a great foundation for me to build on, man.”

Dimebag also said his “doubling” on the track was inspired by Ozzy Osbourne guitarist Randy Rhoads, adding: “It seemed appropriate to start off in a slow, melodic fashion and then build and build and build to the climax with the big harmonic squeals at the end.”

Moby: Why I love Pantera's album The Great Southern Trendkill