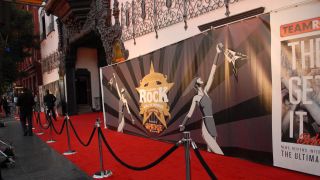 We're at the Avalon in Hollywood, scene of The Beatles' first West Coast show and The Ramones final ever performance. Tonight, the great and good of rock's aristocracy gather to celebrate the passing of another year and to hand out gleaming statuettes to an A List of award winners. We'll be reporting the action as it happens...

23.21pm: And that concludes our coverage from this evening’s event. Keep an eye on Classic Rock News for reports from the show, and tune into TeamRock Radio for highlights. It’s been a blast. Personal highlights? The crowd rising to Rival Sons as they finished their set — it genuinely felt like rock’s old guard saluting the new — Sammy Hagar’s brilliantly enthusiastic, funny hosting (“I know when British guys come up you can’t understand them. When Ozzy comes up, we’ll have subtitles”), and this extraordinary moment from Glenn Hughes. Thanks for reading.

23.12: a flurry of activity as roadies rush onstage to dismantle the podium in record time, and Kings Of Chaos are onstage: Sammy Hagar, Joe Elliott, Billy Gibbons, Glenn Hughes, and lots of cowbell.

23.06pm: And here’s Gregg. Another standing ovation, then back to his seat to leave Sammy to wrap things up. It’s been wild.

23.00: Billy Gibbons is at the podium, where he’s delivering a speech about our final award winner, Gregg Allman. Gregg is picking up the Inspiration award sponsored by Orange Amps.

22.55pm: Dr Brian May is here to present the Maestro Award. Brian is wearing a rather fetching denim shirt and black jacket combination.

22.48pm: The ever-delightful Pauley Perrette, from NCIS, is onstage in a rather magnificent black-sequinned gown. She’s presenting the VIP Award to Sharon Osbourne, who’s just reached the stage amidst huge amounts of hugging. It’s all sponsored by the Sunset Marquis Hotel, Restaurant and Spa. Sharon is emotional. Huge rounds of of applause, the Osbourne family on their feet, clapping, and she’s gone.

22.39pm: Eric Idle is at the podium, wearing a very loud snakeskin shirt. He’s here to present the Outstanding Contribution Award, sponsored by Citibank. And the winner is: all the way from Birmingham, heavy rock’s heartland, ladies and gentlemen, be upstanding… for Mr Blue Sky himself, Jeff Lynne.

22.36: John Densmore makes his way to the stage. Another standing ovation. There’s a lot of love in the room.

22.31: Next up it’s the Inspiration Award, sponsored by GlobalMerch and presented by Henry Rollins. He’s onstage now, and I’m not going to keep you waiting, because we’ve already announced this one. In their town, on their own home turf, it’s the quintessential LA band, The Doors.

22.24: Reissue of the Year? There can only be one. Or three. it’s the deluxe editions of Led Zeppelin’s first three albums, remastered by Jimmy Page. He’s taped his acceptance speech, and he looks thrilled.

22.20pm: Scott Ian is about to present the Metal Guru award to Megadeth’s Dave Mustaine, who’s sitting in his chair, grinning.

22.15pm: and now we’re going to have another musical break. And it’s a treat: California Breed are playing live on the balcony! In other news, the Republicans have won control of the US Senate.

22.12pm: Ozzy looks genuinely delighted, Sharon on the verge of tears. And then the Prince of Darkness wanders offstage, into the darkness itself.

22.10pm. Turns out he’s presenting the Classic Album Award, sponsored by Eagle Rock News, to Ozzy Osbourne, for Blizzard Of Ozz. And here’s Ozzy himself! Clapping! He’s been up and down out of his seat, very excited. Another standing ovation.

22.02pm. This is very exciting. The Album of the Year Award, sponsored by MixRadio, goes to Roger Daltrey and Wilko Johnson for the excellent Going Back Home. They’ve taped their acceptance speech.

9.57pm: Next up, it’s a biggie: Band of the Year, sponsored by UMG. And it’s Brian May and Adam Lambert onstage, which means their Royal Majesties Queen have triumphed, and are claiming the statuette.

9.52pm: a standing ovation and a big hug from Sammy Hagar as Eric Burden goes onstage to receive the Bluesman Award, sponsored by Blues Magazine.

9.50pm: The Film Of The Year award, sponsored by AXS TV, goes to Metallica for Through The Never. The award was picked up by Classic Rock’s Geoff Barton, one of the first writers to pick up on Metallica. Lars appears, as if my magic, via video link.

9.42pm: Best new band. The first award of the night goes to The Cadillac Three, straight outta Nashville, Tennessee. This award was voted for by fans.

9.07pm: Sammy Hagar (who loved that Rival Sons performance, he says) is in the wings, limbering up, ready to start presenting the awards, and we’re not too far away from the first, for best new band. Who will it be? We don’t know, and we work here.

8.59pm: The lights have dimmed. Anticipation ripples through the crowd. Rival Sons are just about to go onstage. This is going to be MENTAL.

8.31pm: here’s a picture from Scott Weiland & The Wildabouts’ live set. It rocked in an extremely large way.

7.52pm: Sammy Hagar, Joe Perry, Ozzy Osbourne and Gregg Allman being interviewed by Doug Kolk. If you’d like to know more about Doug, he’s written a blog post which reveals why he’s single, what he looks for in a woman, and the problem with dating.

7.43pm: Here’s something from a little earlier. Ladies and gentlemen… Adam Lambert.

7.30pm: things may settle down for a while now as a three-course dinner is served. We’ll try and get some pictures of food. Just spotted Zakk Wylde, Eric Idle, Joe Perry, Ozzy Osbourne and Sharon Osbourne. This could get quite nasty.

7.24pm: we dive inside, and it’s started without us. Scott Weiland & The Wildabouts are live on stage, providing an extremely rocking start to the show.

7.22pm: Now we’re rolling! Sarah Palin, Ban Ki-moon, Adam Lambert, Buzz Aldrin, Mark Zuckerberg, Delia Smith and the Pittsbugh Steelers have all arrived. Actually, only one of those is true.

7.08pm. Holy Crap. Dr Brian May, Greg Allman, Sammy Hagar and Shep Gordon have all arrived at once. Panic stations!

6.49: Megadeth’s Dave Mustaine is here, patiently answering questions. We just want to know where our dinner is.

6.30pm: The devastatingly sartorial Rival Sons arrive. We’d suggest they’ve dressed for the occasion, but they always look like this. New shoes, perhaps.

6.21pm: Scott Ian arrives, but we’re more interested in the Allman Brothers t-shirt on the right. Where can we buy one? Are they on sale? Do they come in XL?

5.51pm: People are beginning to arrive on the red carpet. And some have made more of an effort than others.