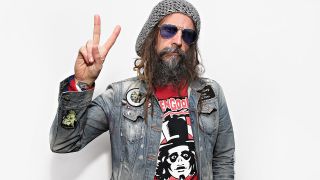 The movie will launch at some point later this year and follows 2001’s House Of 1000 Corpses and 2004 movie The Devil’s Rejects.

And while the film premiere date is still under wraps, the official soundtrack will be out in August through Waxworks Records – and they’ve revealed the cover art and three tracks from the film which can be found below.

The label say in a statement: “Waxwork Records is proud to present Rob Zombie’s 3 From Hell Original Motion Picture Soundtrack!

“The plot is centred around the three main antagonists of the previous films played by Sheri Moon Zombie, Bill Moseley, and Sid Haig, and introduces a new character, Foxy, played by Richard Brake.

“The film marks the long-awaited conclusion to Zombie’s gory and original tale of the Firefly clan.”

Ahead of the film launch, Zombie and Marilyn Manson will head out on the road together this summer on the Twins Of Evil: Hell Never Dies North American tour.