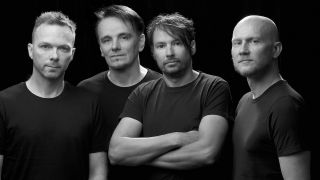 The Pineapple Thief have unveiled their brand new single, Far Below.

The song comes from their forthcoming studio album, Dissolution, which is the first to feature former Porcupine Tree/current King Crimson drummer Gavin Harrison as a full time member.

“Far Below began life as a bit of a jam session between myself and Gavin,” says The Pineapple Tree frontman Bruce Soord. “Gavin had this distinctive 6/8 rhythm going and it didn't take long for me to find the melodies.  And so, a song was born. Is it my favourite track from the album? Impossible to judge as the album covers so much ground. But it does showcase what the four of us want The Pineapple Thief to be about and I for one can't wait to play this one live.”

Dissolution is The Pineapple Tree’s 12th album, and was recorded across the UK at the band members’ various studios.

Says Soord of the album’s themes: “Broadly speaking the title reflects the disintegration of relationships and the undoing of our social fabric.  We’re living in a time when supposedly we are more connected than ever before, but I personally am at my happiest when I unplug that connection.”

Dissolution is released on August 31 via Kscope.