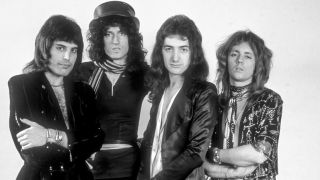 A clip featuring Queen performing for the first time on the radio with acclaimed BBC DJ John Peel has been released.

The lyric video features the band’s performance of My Fairy King in February 1973 – five months before the release of their self-titled debut album. Listen to it below.

It forms part of six radio sessions which have been unearthed for forthcoming release Queen On Air – The Complete BBC Sessions, which will launch on November 4. The collection will feature 24 recordings, including alternate versions of the debut single as well as reworked classic album tracks.

Restored by Queen engineer Kris Fredriksson and mastered by Grammy award-winning Adam Ayan, the package will be available as a 2CD set and a 3LP vinyl edition, plus a deluxe six-disc edition featuring a CD of live broadcasts and three CDs of radio interviews. It can be pre-ordered via the band’s website.

Guitarist Brian May says of My Fairy King: “This was the first time we’d really seen Freddie working at his full capacity. He’s virtually a self-taught pianist, and he was making vast strides at the time, although we didn’t have a piano on stage at that point because it would have been impossible to fix up.

“So, in the studio was the first chance Freddie had to do his piano things and we actually got that sound of the piano and the guitar working for the first time which was very exciting. My Fairy King was the first of these sort of epics where there were lots of voice overdubs and harmonies.

“Freddie got into this, and that led to The March of The Black Queen on the second album and then Bohemian Rhapsody later on.”