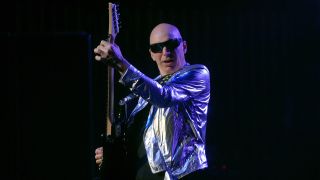 Joe Satriani has reflected on teaching guitarist Kirk Hammett during his first days with Metallica.

Satriani has forged a successful solo career, but has also spent much of his time as a guitar tutor, and nurtured talent including Hammett, Steve Vai and Testament’s Alex Skolnick.

Looking back on the days he spent with a young Hammett, Satriani tells Classic Rock: “Kirk was a great student. He was very eager to learn. His fingers moved great – and he had great taste in guitar players like Michael Schenker and Uli John Roth. He was completely musical.

“He’d been in Exodus, but all of a sudden got in this band, Metallica, and he disappeared for a few months then came back with a copy of Kill ’Em All. Thrash metal songs had brand new chord progressions that had nothing to do with blues, Zeppelin or the Beatles.

“Kirk would come in and say, ‘Check out this new song I have to solo over – what key is this in?’ Often the song wasn’t in just one key. I had to teach him to decipher the song’s tonality, to understand the musical possibilities, and how to make his own decisions on what to play.”

Satriani says he remembers a “young kid full of talent and enthusiasm” and reports that Metallica track Hit The Lights perfectly captured the sound of the time and adds: “Kirk had just replaced another great guitar player, Dave Mustaine, and at first he took Dave’s approach of playing blues rock over the progressions.

“As the Metallica records pile up you can hear Kirk working in more exotic scales, but every now and again he’ll still play a solo that sits on top of the riff – the one from Sad But True, echoes the early Kirk Hammett.

“Even after all these years his finger tone’s still the same. He burst on to the scene with that sound and throughout Metallica’s musical journey his solos come up big, thick and full of energy.”

Satch says he still tells people not to get hung up on music theory and adds: “People are looking for that special thing that you can’t put into a book, you have to curate that yourself – and Kirk’s never lost sight of that.”

The guitarist also singles out Queen’s Brian May, saying that he has a sound which could never be confused with anyone else.

Satriani adds: “Brian’s like a whole universe unto himself. The first time you hear him you go, ‘What the fuck is that?’ It’s beautiful music, original tone and an amazing application of the guitar – the harmony, the way he strings together his rhythm and solo parts, his ensemble and call-and-response parts.

“It’s unbelievable how deep his universe is.”

Satriani features in this month’s Classic Rock article on the 100 Greatest Guitar Solos of all time. He’s been voted at no.47 for his work on Cryin’ from 1992 album The Extremist.

Issue 229 of Classic Rock is available now in print and via TeamRock+.

Inside the mind of the guitarist: Joe Satriani