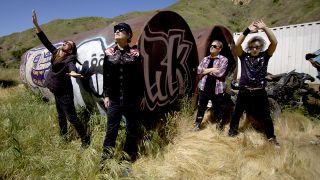 Redd Kross have released a stream of their new single The Party Underground exclusively with Louder.

The track has been taken from the Los Angeles outfit’s upcoming studio album Beyond The Door, which will launch on August 23 through Merge Records.

The song features a guest solo from Melvins’ vocalist and guitarist Buzz Osborne, with Redd Kross bassist Steven McDonald explaining: “I wanted to hear three of my favourite guitarists and collaborators – Buzz Osborne, Jason Shapiro and Jeff McDonald – trade off solos while we celebrated the finer things deep in the bowels of the underground, expressing gratitude for a life lived in the cultural petri-dish of the world, the world of underground culture.

“I’ve been playing nightclubs since 1979 and I was 12, and it was time for me to talk up the wonders down here. The best stuff will always come up from the bottom. It’s the Party Underground.”

Beyond The Door is said to be inspired by the band’s “total commitment to having the best fucking time we can have while we’re all still here,” with Steven reporting it’s his and brother Jeff McDonald most collaborative record to date.

He says: “Jeff is still very much the driving force behind the compositions, but with more help from me than ever. Jeff and I haven’t shared this much of the writing and singing since Born Innocent in 1981.”

Redd Kross will hook up with Melvins in September for an extensive US tour, while Beyond The Door is now available to pre-order. Find further details below.

Redd Kross: Beyond The Door
Los Angeles alt-rockers Redd Kross will release the follow-up to 2012's Researching The Blues in September. Beyond The Door features the single The Party Underground.View Deal