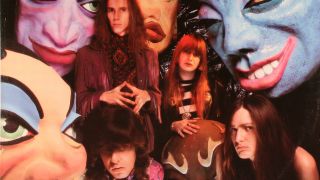 Redd Kross are a lot like that. Not so much the nasty surprise part, but the clever and slightly sinister subversion of a sugary, wholesome confection.

At the dawn of the 1980s, the still snot-nosed Redd Kross were known as the less ornate Red Cross. Steve was 13 at the time. He played bass. Jeff, who sang and played guitar, was a little older, but not by much. Both had already spent way too much time watching cartoons and listening to Beatles records. The origin of their current moniker is suitably apocryphal, but theories abound: they’re named after a certain bloody prop from the film The Exorcist, for example, or the name is a homage to the slam-pit casualties at their early gigs. Whatever the truth, the pertinent facts are that the International Red Cross sent them a ‘cease and desist’ letter, so they ceased and desisted, and altered their name to something that not only resembled a certain beloved junkyard dealer, but also hinted at a new direction: bigger, weirder, glammier.

“But it was fun playing the music that we did, dressing the way we dressed, playing in front of those kinds of crowds,” says Jeff. “We always got a reaction. The thing I learned early on is that when you’re on stage with the guitar, it really doesn’t matter who’s fucking with you, because you have power. For us it was an incredible education. People just wanted music to slam to and we weren’t giving it to them, we were giving them wah-wah pedals and The Partridge Family.” Steve laughs, “We were purposefully out-asshole-ing the assholes.”

The mainstream was not exactly ready for Redd Kross. In a Billy Idol world, they were The Archies with an edge. “The bands we were into focused on writing great songs,” says Steve. “I think that’s what our goal always was: to create a collection of great songs, something you can still listen to years from now and not go: ‘What was I thinking?’”

Redd Kross were never afraid to wear their influences on their sleeves, no matter how odd they were. Neurotica was inspired mostly by breakfast cereal. Third Eye, considered by many to be their power-pop masterpiece, was equally obsessed with bell-bottoms and Paul Stanley. Their later albums – 1993’s Phaseshifter and ’97’s Show World – dropped a lot of the kitsch and went straight for the jugular. But, even then, songs about after-school specials and obscure covers (The Quick! Frightwig!) were never far behind. While grunge bloomed like some heroin-addled algae, Redd Kross kept rock’n’roll fun. And weird.

In between albums and high-profile tours with everyone from Stone Temple Pilots to the Spin Doctors, the band kept busy with bizarre side-projects (Beatles covers band Tater Totz; hardcore punk homage/satire Anarchy 6) and film projects. The brothers starred in 1984’s Runaways-inspired, underground trash epic Desperate Teenage Lovedolls and its sequel, Lovedolls Superstar, as well as the cult hit The Spirit Of ’76. The film starred one of the McDonalds’ childhood heroes, 70s teen idol David Cassidy, hit maker and star of The Partridge Family TV show. The brothers were thrilled. Cassidy, who in the film lampooned his bubblegum days, not so much.

“Whenever I see a David Cassidy ‘behind the fame’ kind of thing, that’s considered such a low point in his career, they don’t even mention it,” says Jeff.

“Spirit Of ’96,” says Steve. It could have a Reality Bites vibe, with music by Creed and Nirvana.”

The brothers haven’t acted together for a decade, but Jeff says that may change soon: “We just reunited with Dave Markey, who directed the Lovedolls movies. We did a video for a song on the new album, and I was thinking about how much fun it was. So you never know. It’s gotten a lot cheaper. You can buy HD cameras and editing software, so if you’ve got some good ideas you can just go out and make movies. So maybe. I’ve always liked doing that stuff, we’d just have to find the time. I’d like to do a rock’n’roll movie, like a middle-aged version of Ferry Cross The Mersey or something.”

Ah, the latest album. You can’t have a self-respecting comeback without a comeback record. Its title, Researching The Blues, may be worrisome to long-time Redd Kross fans. It has, after all, been over 20 years since they last released a new album. Have Redd Kross given in to late-career clichés? Have they traded in their pop culture obsessions and AM-radio pop hooks for harmonicas and covers of Parchman Farm?

“Anyway, we never said we were playing the blues, we said that we’re researching them,” adds Steve. “So don’t worry.”

Indeed any concerns of Redd Kross losing the plot after being gone for so long are dashed as soon as Researching The Blues starts up. From the blistering title track to the hard rock crunch of Uglier, to the pop- psych grandeur of Dracula’s Daughter, the album is as fresh and as sharp as anything they’ve done.

“For us it’s about not being affected by outside sources, but also being in touch,” says Steve. “I think a lot of bands that haven’t been around for a while start getting sucked into their own egos and they lose touch with what’s going on. And then when they resurface they’ve given all their money away to some commune, or something. Then they’re back on the scene and they’ve lost all touch with reality. I’ve seen it happen to a lot of bands that I liked. I’ve vowed to myself that it wouldn’t happen to me.”

It hasn’t. Researching The Blues might be the best album Redd Kross have ever made. And they know it.

“I think this is a ‘bring back the album format’ kind of record,” says Steve. “I think it’s the kind of record where, when you put it on, you’re not shuffling around for something else to listen to before it’s done. Not to sound too Paul Stanley or anything, but I think it’s a definitive moment in our career.”

“See, I am always trying to write that elusive perfect pop song,” says Jeff. “Not one that’s going to be a hit, necessarily, but one that just seems perfect. I’m just a huge fan of rock music, and we know how to do it really well. That’s the purpose of doing this record. You don’t have to be political. We’re just sharing our musical heritage with the younger generation.”

Buzz Osborne's guide to the greatest Melvins albums ever made