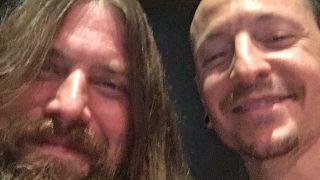 Lamb Of God guitarist Mark Morton has posted a picture of himself with Linkin Park frontman Chester Bennington – in the studio.

The Twitter image is accompanied by a caption which reads simply: “Sounds killer, too!”

The PRP report that Bennington also shared an Instagram post, with the Linkin Park man glancing over lyrics to a song they are said to be working on together – although it appears that post has since been deleted.

They also say that producer Josh Wilbur is involved with the project. No other information has come to light as to what the pair might be working on.

Linkin Park are gearing up to release their new album One More Light on May 19 – and it was recently revealed that young British grime artist Stormzy will guest on the track Good Goodbye with Pusha T.

The band’s Mike Shinoda told the BBC: “We reached out when his album was still under wraps. His manager came back, he said Stormzy loved the idea and just asked us to be patient.

“Time went by and we thought we should move on and then right before we had to turn in our record, I got a message from his management saying, ‘Check your inbox.’”

Linkin Park will head out on tour from next month in support of One More Light. Lamb Of God, meanwhile, will tour across North America this summer with Slayer and Behemoth.