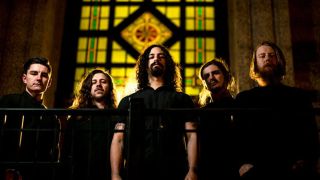 Ghost Bath leader Dennis Mikula, aka Nameless, says that using lyrics isn’t always the best way to get a message across.

He was inspired by Icelandic outfit Sigur Rós, who who invented their own language to fit their music, to scrap most lyrics and instead rely on screams and the power of the vocal cords to deliver emotion.

Namless exclusively tells Metal Hammer: “Lyrics can add to the music, but a lot of times they can really take away from what an artist wants to achieve. It takes away some of the abstractness, instead of letting the listener interpret it however they want.

“Sometimes I do find myself saying actual words. Playing live or in the studio I’ll start screaming and a certain line will come out.

“It’s never anything random that has nothing to do with it, but it happens. People have guessed at what I’m saying in certain parts and I don’t think anyone has been able to tell.”

He reveals that he reflects on painful events in his past to harness his sound, and adds: “I basically play it as loud as I can and scream to it.

“I like the fact that only I know what those moments are – and I purposefully leave it very abstract.”

Ghost Bath will release their new album Starmourner on April 21 via Nuclear Blast. The record is the final part of a trilogy that started with 2014’s Funeral and continued on 2015’s Moonlover.

The full interview with Nameless can be found in the brand new edition of Metal Hammer magazine, which is on sale now.

Iron Maiden are the cover stars, while Royal Thunder, While She Sleeps, Motionless In White and Life Of Agony also feature.