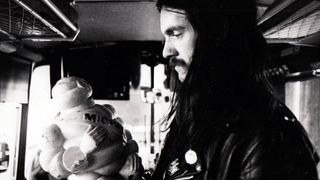 By 1978 punk was softening into new wave, and Motorhead were the ideal antidote to the squeaky-clean posturings of the Police and Boomtown Rats. A welcome mega-blast of supercharged rock‘n’roll in its most primal form, their Keystone Cops mix of lunacy and laughter made Motorhead massive fun to hang out with.

I’d witnessed much of the Overkill tour from close quarters and had taken to visiting Lemmy at his Notting Hill basement lair most days after work at my magazine Zigzag. Pretty soon I found myself accepting the task of writing the first book about them, which involved many sessions with Lemmy and the band, and in June 1979 I was asked if I fancied a trip to Finland, where Motorhead were playing the annual Punkahaarju (Midnight Sun) festival. This is something like what I wrote…

I was anticipating chaos and excess, but not on this scale. We found the hotel where the band and crew were staying and stumbled into road manager Graham’s room at around seven in the morning. He was still up, lobbed over a bottle of Jack Daniel’s, and regaled us with the previous night’s events. This included one of the party supergluing a room’s furniture to the ceiling, and Philthy managing to steer a boat on the lake the hotel was sited on into a tree.

The punters were a disparate rag-bag of clean-cut youths and drunken rockabillies, who’d all obeyed the tradition of getting hideously plastered on illegal hooch before entering the gig. Lots of messy individuals picking fights, crap local rockabilly bands and permanent daylight. Phil, still legless from earlier, insisted on going up to girls, wearing an ice-bucket on his head, then bellowing, ‘Show us your beef curtains!’, which guaranteed a fight with their already-hostile and increasingly-drunk boyfriends.

The festival site featured a little caravan for a dressing room. In his book White Line Fever, Lemmy says I was, “walking about with this tree, for some reason. It was a small tree, but nonetheless he put it through one of the caravan’s windows while he was trying to talk to us. I guess he forgot he was carrying it. So we felt, well, we fucked up the caravan now, so we had better disguise the fact by sailing it into the lake and setting it on fire – give it a Viking funeral. And it went out very well, floated off in a very Arthurian manner, flames and smoke pouring out of it, and it sunk in quite a dramatic display.”

I must make it clear this wasn’t the whole caravan. The fibre glass structure had already split in half and buckled into two shells. Using the table as base, a kind of boat was constructed and the Viking funeral commenced. The theme continued back at the hotel, with Phil and Eddie planting all their room furniture, laid out just right, outside in the garden at around six in the morning - in broad daylight.

This appalling behaviour continued to spiral in a downwards direction on the early morning bus to the airport. While Phil bellowed about “Fjords!” and “Beef curtains!”, the coach party wore their seat covers as Tommy Cooper-style hats. When the rather snotty driver issued a warning about not making a mess, a major food fight broke out, sending a circle of ham to land square on his bald patch. It now sat there like a skullcap. I had my cassette recorder on and, miraculously, still have the tape (Why, at some point, does Lemmy shout, “Covered in excreta dressed as sailors!”?).

We got to the airport and were standing at check-in when the driver came running after us. Unbelievably, after all the hideous abuse, he was only returning the tour manager’s brief-case, which had all the gig money in it. “I think you left this”. After that stroke of luck, the customs guys dragged Motorhead and the crew off in relation to all the damage done at the festival. They didn’t get back for about four days and this national outrage took most of the gig money to sort out.

But, all told, it had been fantastic fun and my first proper taste of Motorhead-style mayhem. And it was only the beginning…