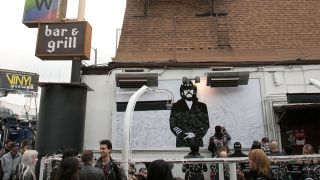 Los Angeles artists Travis Moore has been commissioned to create a cast bronze statue of Lemmy to be erected outside the city’s Rainbow Bar & Grill.

The late Motorhead frontman was a regular at The Rainbow and a memorial was held at the venue on the day of Lemmy’s funeral on January 9. A mural was painted on the bar’s wall as a mark of respect.

A crowdfunding campaign was launched last month to help pay for a permanent tribute to the singer and bass player and now Moore has been told to get to work on the project.

The life-size cast bronze statue will stand at just over 6 foot tall and will be situated in a special shrine that’s currently being constructed in the patio bar area.

Moore will initially create an 18-inch version of the statue before the life-size version is cast.

Moore says: “I’m so happy to be creating the Lemmy statue. This will be an amazing tribute to him and all the Motorhead family out there around the world, who are helping raise the cash.”

The Download festival will rebrand its main stage as The Lemmy Stage this year and organisers are working on a tribute to replace Motorhead’s place on the bill.