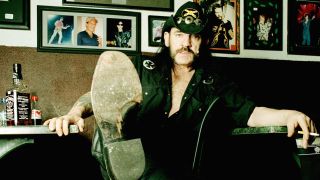 A 12-hour memorial service will take place for Lemmy at the Rainbow Bar And Grill on January 9.

It follows the Motorhead mainman’s death on December 28, aged 70, two days after he’d been told he had an aggressive form of cancer.

Lemmy was the West Hollywood venue’s best-known regular and was often seen playing video games at the bar. Owner Mikael Maglieri arranged for the icon’s favourite game to be installed at his home in his final hours.

The Rainbow have released a picture of Lemmy at his machine, saying: “Join us as we say goodbye to a dear friend and loved one. We will open our doors at 2pm.”

Meanwhile, the campaign to make Motorhead classic Ace Of Spades the UK’s No.1 single continues, with organisers reporting the main competition comes from pop star Justin Bieber. They’ve provided a full list of links for downloading and streaming, which all count towards the chart to be compiled on January 7.