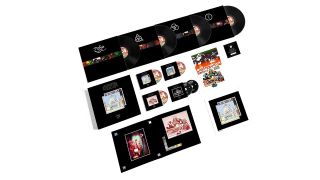 Watching The Song Remains The Same at the cinema was a rite of passage for a whole generation of rock fans, and the album that followed was the soundtrack to the film, recorded at New York’s Madison Square Garden in July 1973.

Earlier this year guitarist Jimmy Page oversaw the remastering of a re-release, which hits the stores on September 7 via Atlantic/Swan Song.

And now? The deluxe version is half price on Amazon as the retailer ramps up its Cyber Monday activity.

• 2DVD set of the The Song Remains The Same featuring the full theatrical version of the film plus bonus content, including four performance outtakes that were not part of the original film: Celebration Day, Over The Hills And Far Away, Misty Mountain Hop and The Ocean

• DVD of the full album in Dolby Digital 5.1 Surround and PCM Stereo, plus photo gallery

• Replica of the Japanese program from 1977, previously available only when the film first toured cinemas in Japan

The Song Remains The Same (Super Deluxe Boxset) - half price

Wherever it sits in the canon and whatever its limitations, for millions of second-generation Zeppelin fans, too young to see the band live, the film and soundtrack was a crucial imprinting – a doorway to a lifetime’s love, and one that essentially renders any critical appraisal, now or then, redundant.