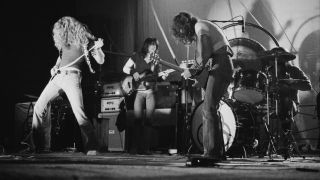 Led Zeppelin have released an alternative mix version of Rock And Roll from the IV remaster set, which is out on Monday. A remastered Houses Of The Holy will be issued on the same day.

It’s one of the tracks on the Led Zeppelin companion disc, which features alternative version of all the tracks on the album. It’s been curated by guitarist Jimmy Page, who oversaw the remastering of the 1971 album.

“Rock And Roll is something that came more or less out of thin air,” says Page. “John Bonham played the drum introduction, and we were doing something else at the time, and I came in with the riff and stopped what we were doing and did it. It was spontaneous. You can tell everyone is having a real good time. The piano is by Ian Stewart (longtime sideman with the Rolling Stones). This version is a different mix, a different perspective on the song.”

The Led Zeppelin IV remaster is released on October 27, alongside Houses Of The Holy.