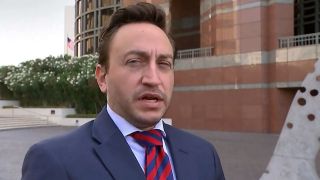 Lawyer Francis Malofiy, who led the Stairway To Heaven lawsuit against Led Zeppelin, has been suspended over his conduct in an earlier rights trial.

He’s been forbidden from practising for three months and one day as a result of his actions during the 2014 case concerning Usher’s track Bad Girl.

The decision comes a week after a California court ruled that Led Zeppelin did not breach the copyright of Spirit track Taurus when they wrote Stairway To Heaven – a position that Malofiy had argued against. He was subject to several admonishments during those proceedings, while Judge Gary Klausner also upheld more than 100 objections against him.

In 2014 a judge ordered him to pay $28,000 in costs after he was found to have misled a co-defendant into signing a document without appropriate advice. Additional concerns had been raised over Malofiy’s “unprofessional” and “uncivil” conduct during the trial.

Malofiy argued that he hadn’t broken the rules, and that if he had the punishment was too harsh. But this week a three-judge panel upheld the earlier decision.

And although the ruling applies to the state of Pennsylvania alone, California rules require all lawyers to be “of good standing” – meaning that if his client Michael Skidmore launches an appeal against the Led Zeppelin ruling, Malofiy may not be able to lead it.

After the Stairway To Heaven decision Malofiy hinted that an appeal would be lodged, saying the band had “won on a technicality” and adding: “We do not believe it is legally correct or logically sound.”

Led Zeppelin: a timeline of the Stairway To Heaven trial