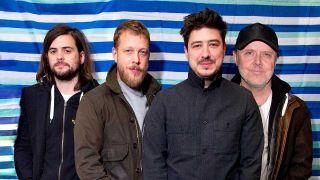 Fans of mystifyingly successful folk revivalists Mumford & Sons were given a surprise treat this week, when Metallica drummer Lars Ulrich joined the band onstage for a rousing rendition of The Wolf.

The historic coupling took place at the Austin City Limits Music Festival in Texas on Sunday, when Mumford & Co. headlined the final day of the annual event.

Ulrich joined the band onstage at the climax of a 16-song set. "We'd like to invite a friend of ours from a little band called Metallica," bellowed band frontman Marcus Mumford, before introducing Ulrich to the audience.

It is not known if the move is to be made permanent.

Late last week it was confirmed that Metallica would headline five US festivals in 2020, playing two headline sets at each event.

They’ll hit the stage at the Epicenter festival, Welcome To Rockville and the Sonic Temple Art And Music Festival before further appearances at Louder Than Life and Aftershock.

“I really don't think that much about the setlist that much in advance," says Ulrich. "We like to go deep and dust off things that we haven't played for a while.

"It’ll be fun, it’ll be challenging, but we thrive on this shit – and any time we get a chance to do anything outside of the norm, Metallica are four very happy guys.

“I don't want to freak anybody out, but it may not come together until about 24 hours before the first show, but it will definitely come together.”