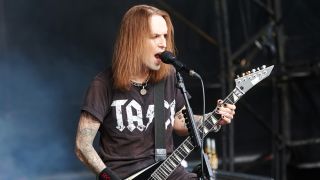 Children Of Bodom frontman Alexi Laiho says while it’s hard to make a living from selling records, he has no complaints.

And he insists with record sales declining, the best solution is to get out on the road.

When asked about the situation following the group’s appearance at Bloodstock, the Finnish guitarist/vocalist says: “I think it applies to all genres of music – it’s harder to make a living nowadays because people don’t buy records like they used to.

“But it’s nothing to complain about – you’ve just got to get out there and play live. Just keep touring and you’ll be fine.”

The band are set to support Machine Head on their 21-date North American tour in October along with Epica and Battlecross, and they will begin work on the follow up to 2013’s Halo of Blood before the turn of the year.

Laiho says: “We’ve rolled with Machine Head a few times in the past. My best memories are kick-ass shows, parties, camaraderie and vocal coaching from Robb Flynn back in 2008, so I think we’ll have a good time tearing it up over North America.”