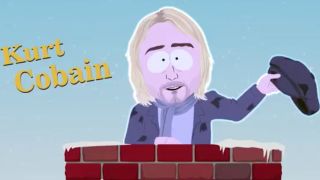 Series creators Matt Stone and Trey Parker had the image of the Nirvana mainman sing festive tune Up On The Roof Top before the hologram loads a shotgun and pulls the trigger revealing a flag reading ‘Merry Christmas.’

Images of Elvis, Tupac and Michael Jackson were also included in the episode which turned into a social commentary about the USA’s recent race issues involving the deaths of Michael Brown and Eric Garner.

In the past, Parker and Stone have worked with bands including Radiohead and Rush, while Primus recorded the original theme songs for the long-running series.

A trailer for the Christmas episode can be seen below.