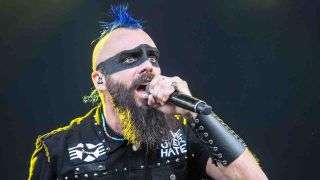 Killswitch Engage frontman Jesse Leach has surprise-released the debut album by his hardcore punk side project The Weapon.

A Repugnant Turn Of Events is available on Bandcamp, with a portion of the profits going to help clubs in New York that have been affected by the COVID-19 pandemic.

Leach told Loudwire: “The themes range from political corruption, human rights to keeping a positive mindset in the face of the hardships of life. We are sort of a mix of crust punk and post-youth, lyrically, which is sort of a contradiction, but it feels right. Pissed that the world is going to shitt vs. keeping a positive state of mind."

Killswitch Engage were forced to cancel their tour with August Burns Red and Light The Torch due to the coronavirus outbreak. They hope to reschedule their tour soon.