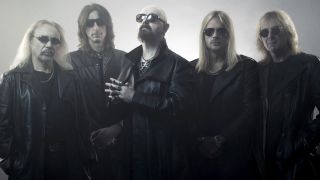 They’re gearing up to begin work on the follow-up to 2014’s Redeemer Of Souls, which was their first studio project with guitarist Richie Faulkner, who replaced KK Downing in 2011.

“I can’t wait to get into the writing zone again – that’s one of the most thrilling moments for me in Priest.

“You go into a room with some amps, ‘Hey, guys, have a cup of tea,’ turn the amps on, start riffing, and boom – you could have another amazing Priest song by the end of the day.”

There’s no set timescale for the project, but Halford adds: “There was already an extraordinary amount of ideas collected throughout that tour, so I’m optimistic we should have something, probably not by the end of this year, but definitely by the early part of next year.”

Faulkner reported last month that studio time had been booked for April, saying: “We have a big legacy to uphold. We’re looking forward to getting into the studio and seeing what we’ve come up with.”

KK: I'd return to Priest for ‘greatest’ metal tour