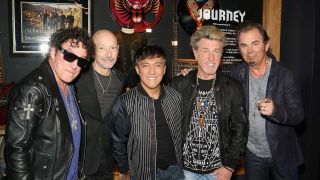 The news was broken in a press release from Los Angeles-based law practice Miller Barondess, who have issued a lawsuit on behalf of guitarist Neal Schon and keyboard player Jonathan Cain. The lawsuit claims that Smith and Valory had attempted a "corporate coup d'état" to gain control of one of the band's business entities, Nightmare Productions.

The firm are also seeking damages in excess of $10 million.

The lawsuit states, "In 1998, Schon, Cain and [former singer Steve] Perry entered into a written agreement providing Schon and Cain the sole, exclusive, irrevocable right to control the Journey Mark, including the Journey name. They are, therefore, authorised to perform together as Journey, with or without anyone else.

"Defendants Smith and Valory were members of Journey at various times during the band’s history. Collectively, they only have a very few song credits on Journey albums. Nevertheless, they were compensated generously for many years.

"They hope that, by taking over Nightmare Productions, they can hold the Journey name hostage and set themselves up with a guaranteed income stream after they stop performing. Smith and Valory began their campaign to take control of Nightmare Productions in December 2019 by conspiring to oust Schon and Cain from control."

The claim continues, "With their actions, Smith and Valory have destroyed the chemistry, cohesion and rapport necessary for the band to play together. Journey can only tour successfully and succeed creatively if it is united and the band members trust one another. The actions taken by Smith and Valory shattered that trust.

Steve Smith and Ross Valory have yet to respond.

This development is the latest in a long history of spats involving the members of Journey. In August 2017 Schon blasted his bandmates for visiting the White House, claiming they should remain politically neutral. Cain responded the following April, saying it was time for the band to move on.