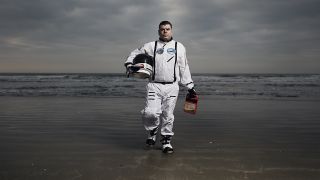 He's been best known for parading around in an astronaut outfit for the past four years as the main man behind the space-themed Lonely Robot, who released their third album, Under Stars, last month. This summer mainman John Mitchell swaps the spacesuit for the cyclist's spandex as he takes part in this year's Heavy Metal Truants charity bike ride from London to Download.

This is the seventh year the Heavy Metal Truants will head off from Alexandra Palace and cycle approximately 185 miles over two and half days up to Download Festival, raising money for Teenage Cancer Trust, Childline and Nordoff Robbins music therapy charities. The HMT, a collective of riders made up of music fans and media and music business employees, were formed by former Metal Hammer Editor Alexander Milas and Iron Maiden manager Rod Smallwood, and also feature Prog Editor Jerry Ewing, Paradise Lost guitarist Aaron Aedy and the European Space Agency's Dr. Matt Taylor, all of whom are riding this year.

“Given that I’m a man more normally associated with prog rock, I’m am more than delighted to have been invited by my colleagues from across the rolling tundra at Castle Metal to participate in this year’s annual Heavy Metal Truants ride," Mitchell tells Prog. "Initially I considered performing this mammoth feat on my 1976 Raleigh Chopper just to up the ante yet having been advised by Jerry to reconsider on grounds of madness and having gone for my first test run yesterday on a bike with considerably more than a Sturmey Archer 3 speed over a distance of a mere 8 miles, I have to concede he may have a point. My nether regions also concur! Have you sponsored me yet? I’m doing it for charity but I don’t like to talk about it… the link is below…. I thank you in advance!”

The Heavy Metal Truants have raised £585,500 for their chosen charities since 2013. This year's goal, inevitably, is to reach a total target of £666,000. The ride heads off from Alexandra Palace at 9am on Wednesday 12 June, arriving at the Download festival site at noon on Friday 14 June.

Any donations are gratefully received here.