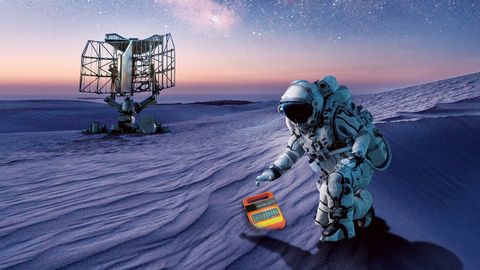 While his impressively dextrous fingers remain in approximately 26 other pies according to our estimates, the It Bites frontman, Frost* and Arena guitarist and of course solo artist John Mitchell has still found time to release a diverting trilogy of albums since 2015 under the Lonely Robot monicker. Under Stars completes the series, and sees the protagonist, The Astronaut, continue his disorientating journey from the stratosphere back down to terra firma, with a certain amount of both earthly and cosmic wisdom gleaned en route.

At times it sounds distinctly faith-oriented, as if he’s found God on his travels. ‘He chose to give his life to us,’ Mitchell sings on the title track, ‘a calling for mankind, and if you search for him then you may find a promised land in everyone.’ More ominously, Ancient Ascendant accuses us of ‘worshipping false effigies’.

However, elsewhere there’s more of a sense of humanity in peril from technology’s enduring allure: ‘Searching in the ether for a new design for life,’ he sings. ‘But this is just a rabbit hole…’ ‘Do you feel, hashtag, ‘proud’?’ he sardonically enquires later, suggesting a life lived on social media is no life at all.

Mitchell’s love for sci-fi soundtracks and futuristic ambience is clearly evident on the opening instrumental, a spacey, symphonic piece that wouldn’t sound out of place on a sequel to 2001: A Space Odyssey. The use of distorted radio-esque vocals and robot voices has become a bit of a prog cliché, but they add to the sense of disorientation and make for an austere, inhuman counterpoint to the powerful emotional pull of the big anthemic choruses that swell up in awesome waves elsewhere.

There are jarring passages of thunderous prog metal riffing to add a forbidding sense of uncertainty to proceedings on Ancient Ascendant and When Gravity Fails, but this album feels as if it’s building towards a homecoming, a relatively upbeat, redemptive ending to three hours of lost-in-space alienation and fish-out-of-water discombobulation.

Authorship Of Our Lives has an irresistible keyboard motif and an insistent hook, while the descending chords and elegiac power balladry of The Only Time I Don’t Belong Is Now and Under Stars are enhanced by some breathtaking guitar work. And How Bright Is The Sun? is a thing of beauty, floating in on blissed out piano to tell us ‘we’ve come too far from home to fall’.

Finally, An Ending offers a flickering, torch song of hope: ‘All we are is lonely robots/This heart is beautiful.’