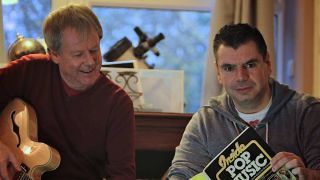 John Mitchell and Chris Hillman have released a video showing life behind the scenes at their label White Star Records.

The label’s first release was Mitchell’s The Nostalgia Factory EP, which will be followed by a new album from former Touchstone singer Kim Seviour later in 2016.

“That’s just to launch the label. Next up, we’ve signed a lovely lady called Kim Seviour and I’m currently and writing and producing an album with her.

“We wanted to make an album that encompasses a general flow of prog rock and extreme rock. Kim grew up in the 90s and a lot of the bands there did the new metal thing.

“We wanted to incorporate elements of that with a bit of prog, to keep the Prog Street kids happy.”

On why they released the clip, Mitchell adds: “A lot of people have been asking Chris and I about our new record label and about why we chose the tracks that we included on The Nostalgia Factory EP, so we thought we’d do a short video to explain.

“Kim was recording with us on the day we filmed it so we were able to include her too. We didn’t want the video to be too serious as, although we do want to create some great music, we also want to have some fun while we are doing it. Hopefully that comes across in the video.”

As well as his work with Lonely Robot, Mitchell is a member of Frost*, It Bites and Arena.