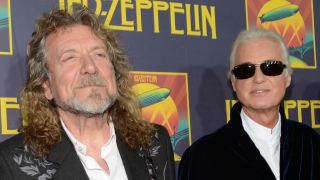 Led Zeppelin men Jimmy Page and Robert Plant are unlikely to appear in court to answer copyright charges over classic track Stairway To Heaven, because the judge may not have the authority to make them do so.

And the band have successfully argued for the repression of evidence that was to be used against them when the jury trial begins in California on May 10.

The legal action centres on whether Led Zeppelin plagiarised 1967 Spirit track Taurus in the opening section of Stairway, which was released four years later and followed the bands touring the US together.

Lawyers representing the estate of late Spirit guitarist Randy California this week submitted a list of various Taurus recordings that they believe reinforce their position.

But District Judge Gary Klausner has agreed that the only recordings to be heard are those taken directly from the copyrighted sheet music.

Klausner has also forbidden California’s estate from presenting any of the music experts they’d lined up to give evidence, since their opinions had been based on recordings not based on the copyrighted material. They’ve been given time to recruit new experts.

The estate also wanted to present evidence of Led Zeppelin’s drug and alcohol use in the 1960s and 1970s, to cast doubt on Page’s claim that he’d never heard Taurus until the lawsuit was filed – but that evidence has also been suppressed.

Jurors will also not hear about a wide range of book excerpts and press articles discussing Led Zeppelin’s alleged copying of music from other sources, with the exception of two statements made by Page.

Led Zeppelin will be allowed to argue in court that California’s estate are not competent to bring the case because the Taurus copyright belongs to his son instead of the estate.

Zeppelin had argued that the chord progression at the centre of the disagreement is so well-used that it doesn’t warrant legal protection. But Klausner wrote in a pre-trial judgement earlier this month: “While it is true that a descending chromatic four-chord progression is a common convention, the similarities here transcend this core structure. What remains in a subjective assessment of the ‘concept and feel’ of two works… a task no more suitable for a judge than for a jury.”

Page and Plant have both recorded depositions that will be presented to the court, assuming that no settlement is reached before the case commences next month. Bandmate John Paul Jones was excluded from the case during Klausner’s pre-trial ruling.