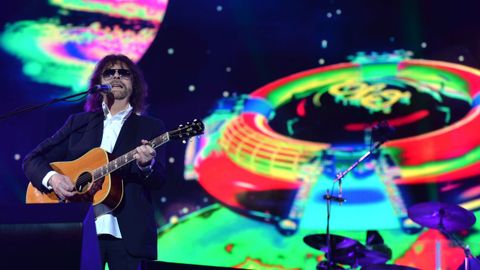 There are in excess of 30 people on stage, yet Jeff Lynne still manages to cut a lonely, unassuming figure as he ambles on to join them. Aviator shades, curly mop and sculpted beard all in place, sporting a plain dark suit jacket over a white shirt, he’s a reassuringly familiar presence despite having not done this for – as the advance publicity has constantly reminded us – 28 years.

Kate Bush’s return to live performance after a gap of three-and-a-half decades just a few weeks earlier may have garnered more press coverage, but make no mistake; this 2014 sighting of ELO’s iconic spaceship (spinning and swirling on the computer-generated backdrop), piloted by another late ‘70s chart regular is, for the 50,000 here, just as big a deal.

Lynne himself seems genuinely astonished by the reception, unable at first to respond with more than the occasional “marvellous” and “you lot are brilliant”, as if he’s schooled himself in stage craft by watching re-runs of Jim Bowen on Bullseye. Despite selling close to 100 million records, being an integral part of the ‘80s’ ultimate super group The Traveling Wilburys and midwifing new Beatles releases in the ‘90s, it’s almost like he’s unconvinced of his own place on rock’s A-list.

In terms of reconnecting with former glories, the only original ELO component other than Lynne is his right-hand man Richard Tandy, bespectacled, grey-haired and professorial at the piano. Filling out the rest of the space is a crack squad of session musicians and – significantly – the BBC Concert Orchestra, this being the headline-grabber at a day of music under a Radio 2 banner.

And what music! From the sweep of strings that introduce All Over The World to the rocked up grandeur of the closing moments of Roll Over Beethoven 75 minutes later, Lynne barely puts a foot wrong, not a note out of place. Such is the breadth of the catalogue he has at its disposal, only one song on the set list never saw active service as a hit single, and it’s likely that one of his biggest headaches was deciding what to leave out.

The attention to detail is breathtaking, classic after classic recreated with sonic and instrumental precision, be it the ominous prog-lite descending chords of 10538 Overture, the lush balladry of Strange Magic, the dizzying cod disco of Turn To Stone, the metal riffing of Ma Ma Belle or the Fab Four facsimiles of Livin’ Thing and Evil Woman. The cyclical nature of what’s considered hip and what isn’t means there have been times when ELO were far from flavour of the month, but lest we forget they were one of the few big Brit bands who survived, and even thrived, after the onslaught of punk, and are now clearly, undeniably, one of the few acts who can truly be called a national treasure.

What Lynne does next remains to be seen, but it would be surprising if Glastonbury organisers weren’t already wooing him for next summer, and a proper global tour would inevitably create box office stampedes at every stop. He may have been floored by the reaction at Hyde Park, but take it from us, Mr Blue Sky; look around see what you do, everybody smiles at you.