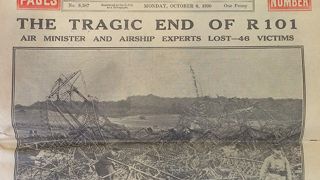 Iron Maiden will release a limited edition picture disc of their track Empire Of The Clouds for Record Store Day on April 16.

Featured on their latest album The Book Of Souls, the epic 18-minute song recounts the tale of the British airship R101, which crashed on its maiden voyage in northern France on October 5, 1930.

One of the worst airship disasters of the era killed 48 of the 54 people on board and essentially ended the British government’s development plans moving forward – just six months before the first test flight of Germany’s infamous Hindenburg.

The Record Store Day release will see Empire Of The Clouds housed in a uniquely artworked sleeve featuring a replica of the actual newspaper story reporting on the fate of the R101 airship. The single’s B-side will present an audio interview with vocalist Bruce Dickinson sharing his inspiration for writing the tune.

Dickinson says: “A very poignant story, a very human story, a story of ambition and dreams.”

Fletcher explains: “After the success of The Book Of Souls last year and especially with the reaction to the triple vinyl format, I felt that a song like Empire Of The Clouds needed to be immortalized in some way. It was never going to be a radio track/ single so after discussions with management, we went down the let’s educate and commemorate a real tragedy that Bruce had chosen to portray in this amazing song.

“As usual with Maiden, they turned the package into something special with unique commissioned artwork and the idea to licence historic material from the Daily Mirror archives from 1930. The result is an incredible package that both vinyl collectors and Maiden fans will be keen to own.”

Iron Maiden are currently playing shows in South America and recently issued a video recap of the first few dates of The Book Of Souls world tour.

Record Store Day 2016 will feature exclusive releases from ambassadors Metallica, Frank Carter And The Rattlesnakes, Gerard Way, Bring Me The Horizon, Twenty One Pilots and Deftones, among others.