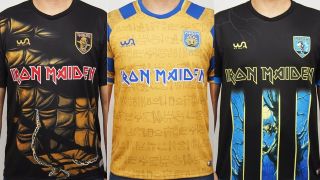 The Die With Your Boots On partnership saw the band’s logo displayed on the front of the English Premier League outfit’s claret and sky blue shirt, with the shorts featuring the club crest and ‘IMFC’ branded on the on the opposite side.

Now Iron Maiden have teamed up with Brazilian brand WA Sport for three football shirt designs, based around the covers of Piece Of Mind, Powerslave and Fear Of The Dark.

The shirt badges are also inspired by the artwork and are branded with “Maiden FC”.

Sadly, the officially licensed shirts only seem to be available for the Brazilian market, but let’s hope they make their way world-wide at some point in the future.

Check out a gallery of the shirts below.

Yesterday, Iron Maiden’s Killer Krew got together from isolation to film a video for Aces High (Lockdown Version).

And last week, it was announced that Iron Maiden would continue their popular CD remastered series with The Live Collection. Two new packages will see Live After Death and Rock In Rio released this summer.

The Live After Death remaster will also come packaged in a specially designed box featuring a 1:24 scale figurine of Eddie rising from the grave, and a patch featuring the grim reaper.

Iron Maiden: Rock In Rio
Iron Maiden closed out their Brave New World Tour in style back in 2001 by playing an epic set in front of tens of thousands of people in Brazil. Experience it all again with this new remaster across 2CDs.