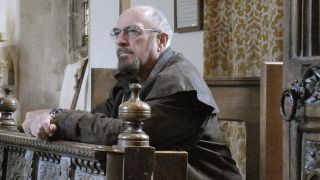 He’s collaborated with the Carducci Quartet, along with longtime colleague John O’Hara, to create 12 reinterpreted pieces for Jethro Tull: The String Quartets, to be released on March 24 via BMG.

In the video below, Anderson explains how he encountered violinists Matthew Denton and MIchelle Fleming, violaist Eoin Schmidt-Martin and cellist Emma Denton via a “rather unlikely” contact, and how he went about “putting them to the test” creating “quite authentic classical-style arrangements.”

Anderson also says: “A couple of years ago I came up with the idea of recording a dedicated string quartet album in a contemporary but classical setting, with brief appearances from myself.

“John came up with a few suggestions of his own which presented challenges. All had an intimacy and presence which I looked forward to recapturing in the cosy and very personal space of my office desk where I did the overdubs.”

O’Hara adds: “There seemed little point in transcribing the band parts and distributing them to the players. I felt a responsibility to delve deeper and offer a new imagining of each piece.

“I also felt a responsibility to the Jethro Tull listeners who cherish this material, and may not welcome a radical rendition of a beloved song. My ambition was to create a thought-provoking album that remains true to Ian’s compositions.”

Most of the reworked pieces have had their titles changed from their originals.

A PledgeMusic campaign is launched today, offering fans the chance to pre-order the album on signed CD and double-vinyl with pictorial printed art on the fourth side. Digital pre-ordering is also available with an instant download of new single Pass The Bottle, via iTunes.