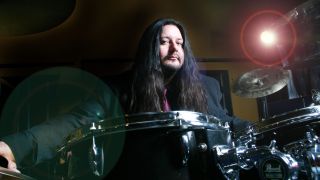 Dark Angel drummer Gene Hoglan has offered some advice for sticksmen looking to make it to the big time.

The veteran, who began his career as a roadie for Slayer, has played with Testament, Viking, Devin Townsend, Dethklok and Strapping Young Lad during his career to date.

He reunited with Dark Angel in 2013 and the group are writing music for their first studio release since 1991’s Time Does Not Heal. He recorded for Pitch Black Forest’s, As the World Burns, and found time to help out his former colleagues in Death by filling in for Sean Reinert on the road.

Hoglan tells BeatIt: “I’ve been preaching this for years: the most important thing for a young player to do is find guys that you like to hang out with – more so than the best musicians in town. You’re going to grow and evolve as a musician and also as a friend.”

“Bands do become families. They become teams, and if you’ve got some really good teammates, really cool family members, everybody’s always going to improve as a musician, especially if you’re a young dude. Everybody gets better.”

He adds: “Say, your guitarist is not the best or your bassist isn’t the best in town. But if he’s a really cool guy and he’s dedicated, that’s another thing. Find like-minded individuals. If everybody’s got the same mindset, everybody grows at the same rate

“If you’re really focused on staying in this industry, find some other guys that have your kind of focus.”

Hoglan plans to release a new instructional DVD, The Atomic Clock: The Clock Strikes Two, early next year. He says: “And also another thing I tell young dudes — and I’m putting this on my next DVD: learn how to read a contract. And I’ll leave it at that.”