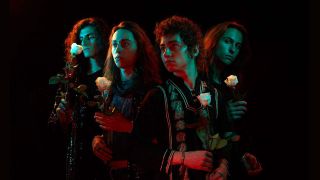 Rising stars Greta Van Fleet have released a new single, Always There. The song comes from the soundtrack of the movie A Million Little Pieces, directed by Sam Taylor-Johnson, which hits cinemas in December.

In a Facebook post, Greta Van Fleet say: "Always There was originally recorded for inclusion on Anthem Of The Peaceful Army, but it was ultimately decided the song didn't fit the tone of the album.

"Thus, it appeared to us serendipitous when A Million Little Pieces requested to use it in the film's soundtrack. We are pleased to share this song with you."

The band are currently in Australia, completing four Antipodean shows that were postponed earlier in the year due to the band's Grammy commitments, and return to the US later in the month for a run of dates.

They'll be back in Europe in November for a European tour, dates that were scheduled for earlier this year but postponed when singer singer Josh Kiszka contracted a respiratory infection.